Solver Types and a Neutrino Detector

The SNITCH has always relied on a set of Reference solvers to calculate the difficulty of the crossword. Updating this list over time has led me to look at different types of solver. In particular, it has been important to detect and remove "Neutrinos" from the data (see further below). Once this is done we can look at other types of solver more clearly.

Neutrino – A person who manually solves the puzzle on paper, and then goes to the Crossword Club and types in the answers as rapidly as possible, either in order to give a high position on the leaderboard or because they are entering a typing competition. (Times for the Times glossary definition)

Have you noticed that the top of the Times Cryptic Crossword Club leaderboard is occupied by solvers who have some remarkable completion times? How does someone solve the puzzle in around 2 minutes, when it probably takes that long to just write in the answers?

On the Times for the Times blog site, we've come to know these solvers as "Neutrinos", a term coined by Tony Sever some years back to describe those people who like to occupy the top spots on the leaderboard without actually being top-notch solvers. The theory is that these people do the crossword on paper, then transcribe the answers on the Crossword Club interface.

And the big question is: how can we detect these? Some of them are pretty obvious: if you look at the results at the table on the right, the top solver in recent months is sudokulover with an average solving time of 02:16 (min:sec). Given that Mark Goodliffe (10+ times winner of The Times Crossword Championship) has an average solving time of around 6 minutes, we're very sure that this is not a real solving time. But it's much harder to tell when you're talking about average times in the range of 5 to 8 minutes. Who are the Neutrinos and who are the real solvers? This page tries to answer that question.

The chart below shows a way to separate Neutrinos from other solvers. It plots each solver's average solving time (in seconds) on the x-axis against an "alignment to SNITCH" factor on the y-axis. This alignment factor is 1 when, on average, a solver's personal NITCH rating for a crossword is proportional to the SNITCH rating for that crossword. It is 0 when there is no alignment. (For those interested, more detail on this is provided below).

The blue dots on this chart represent the Reference solvers for the SNITCH as of October 2019. (Note that you can hover over each point to see the name of the individual solver.) As you'd expect, these are clustered around an alignment factor of 1 (generally between 0.5 and 1.5) regardless of their average solving time.

The red dots represent solvers who have been around for some time but are not Reference solvers. A group of these is spread across the range of average solving times and also spread about the SNITCH alignment factor of 1. But there's a cluster of red dots in the lower left corner that has low solving times and is spread around an alignment factor of 0. These are the Neutrinos.

This data suggests that any solver with a solving time of less than, say, 8 minutes (480 seconds) and a SNITCH alignment factor of, say, less than 0.5 could be safely classified as a Neutrino.

The grey dots represent new solvers since the Reference solver list was updated early in 2019. We can now see that some of these appear to be Neutrinos (Blue Moon, for example), while others - even with low solving times - appear to be real solvers (e.g. Lihar). It would be very difficult to make this assessment without checking the alignment with the SNITCH, so it clears up any speculation that might arise for these.

Of course, this analysis is not 100% guaranteed, but it looks like a good start.

It's curious to see that a couple of solvers (Paul Gilbert and Mike Harper) are "super-aligned" to the SNITCH, i.e. they seems to find harder puzzles especially hard. From looking at the underlying data, my guess is that this is due to a relatively small sample size with a few results pulling the alignment higher.

It is a bit hard to know what's going on with the low-alignment, higher solving average results. There are quite a few with an alignment of less than 0.4, including a handful of Reference solvers. These are presumably not Neutrinos in the Club definition sense (unless they are just very slow typists). But if they are genuine solvers, we'd probably expect them to align to the SNITCH more closely. Maybe there is some underlying inconsistency (e.g. there are actually several solvers of unequal ability doing different crosswords or the solver sometimes has help and sometimes doesn't). These are speculations with no real way to test them.

On the Times for the Times blog site, solvers regularly report their solving times. Where they have allowed it, we now add them to the list of solvers and track their progress. This is a new category of solver, the Blog Solver, for those who've reported solving times regularly over the last six months.

This analysis allows me to reclassify solvers, as shown in the chart below. One of my main motivations is to be able to update the list of Reference solvers reliably. I'd like to be able to include new solvers (especially good ones) without accidentally including Neutrinos. And I'd like to track other non-Reference and non-Neutrino solvers, even if their data isn't used for the SNITCH.

So I can now classify solvers as follows:

New solvers will come into the list over time and can be reclassified on my next update.

I've shown the old and new status in the full table to the right so that you can track the changes for each user.

So what's the SNITCH alignment factor?

This is actually pretty straightforward if you know a little maths. I plot the solver's individual NITCH scores agains the corresponding SNITCH for the same puzzle and measure the slope of the line of best fit. A slope of 1 indicates that the results are proportional, a slope of 0 means that there's no correlation.

For example, verlaine has results as shown in the chart below. Easier puzzles (according to the SNITCH) are on the left of the x-axis, harder ones on the right. Verlaine's NITCH results vary, but are generally higher as we progress from left to right. The overall slope of the line of best fit is 0.95, showing good alignment with the SNITCH on average. 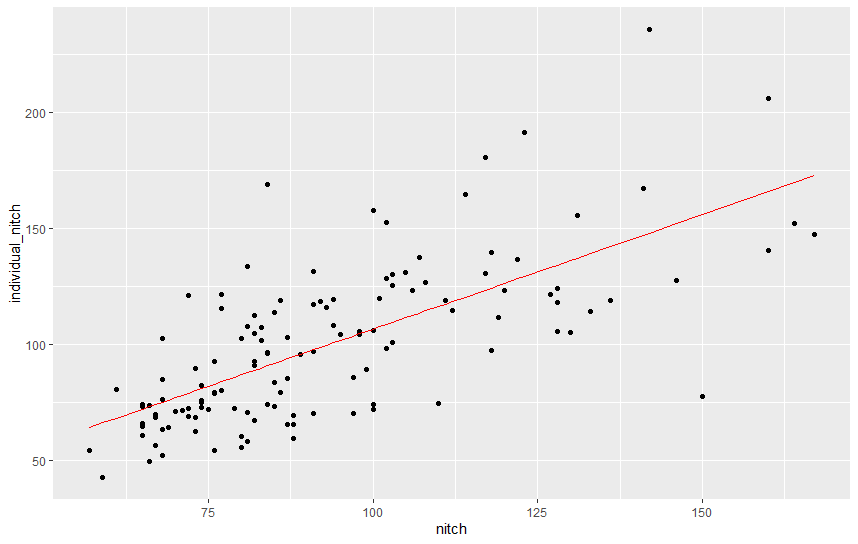 In contrast, sudokulover has results as shown in the chart below. There is no correlation with the hardness of the puzzle according to the SNITCH. In fact, the slope is negative, meaning that on average the harder puzzles are easier for sudokulover than the easier ones. This lack of correlation is exactly what you'd expect if the solver is just typing in known answers. 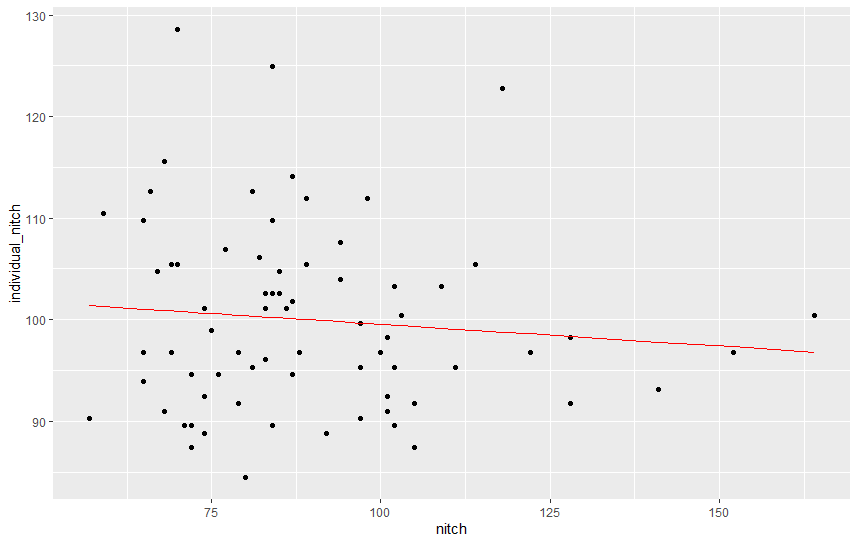 Nothing is simple and we have some solvers with a mix of results like the ones shown in the chart below. There is a correlation with the SNITCH on some solutions but not on others. On the rest, the solver looks just like a Neutrino, with short response times regardless of the SNITCH value. Presumably they type the answers in directly on these shorter puzzles. For this reason, where we detect this sort of solver, we will mark it manually as a Neutrino. 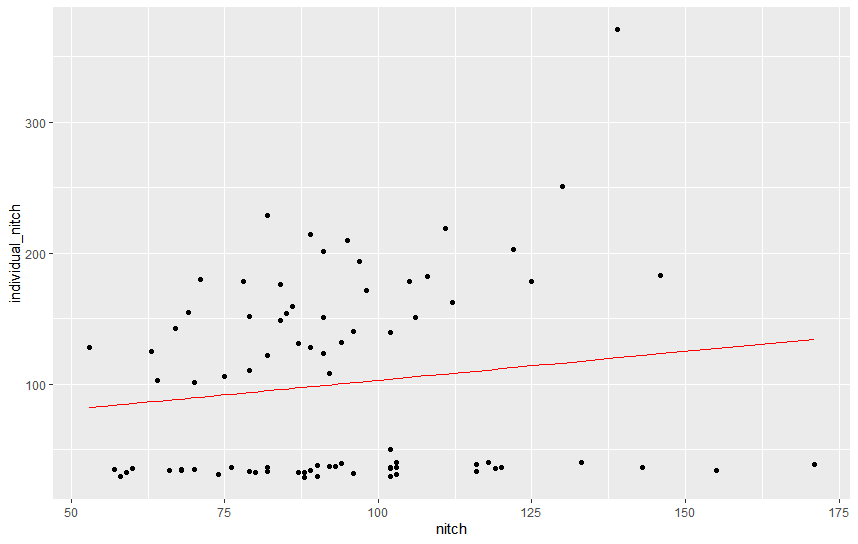 The table below shows crossword club solvers who have submitted more than 20 solutions in the last six months, with an average solving time of less than 60 minutes for an error-free crossword. They are ranked by that solving time. It also indicates their status, including whether they are Reference solvers for calculation of the daily SNITCH.